One of the older sections on The Xenophile Historian, the Chinese history, has now been updated. If you count from the rough draft, this work is really twenty-seven years old. I first composed it in 1988, right after The Last Emperor was in the theaters, and uploaded it to the young website in 1998. Then I might have tweaked the last chapter a bit in 2000, but it’s hard to remember now. What I do remember is that after the new century began, all I did was make additions to the earlier chapters, leaving the last one virtually untouched. Well, in November and December I finally got around to rewriting the chapter covering Recent Chinese history, making the updates it needed.

Here are the topics now covered in Chapter 7, China Since 1949:

To check it out, go to http://xenohistorian.faithweb.com/china/ch07.html

Also, it occurred to me last week that The Xenophile Historian has just come of age. A visitor told me he enjoyed the site’s 1990s Geocities-type look, and I said that gives away the website’s age, because it spent its first two years hosted on Geocities, and in the name of keeping the HTML code and everything else simple (and accessible to all browsers), I haven’t radically changed the style since then. You can read the whole story here.

Since I started working on the site as soon as I had Internet access and had taught myself HTML, in December 1997, that means the site is now 18 years old. Congratulations, we now have a new adult in the family! Actually, it seems like more than that; in Internet time, 18 years is well over a century, right? And over the years, I have put enough work in the site to call it “my other child.”

To all my friends who observe this day, Merry Christmas!  We’ve been having weird weather this month, what with temperatures about twelve degrees above normal (50s and 60s most of the time), and heavy rain this week, with even a bit of lightning thrown in.  Thus, I call the resulting combination a “grey Christmas.”

This picture was taken here in Lexington yesterday.  It shows something I never expected to see in Kentucky, or even Florida – Santa Claus in a Speedo bathing suit!  I shared it on Facebook, and was told this is just plain wrong, LOL. 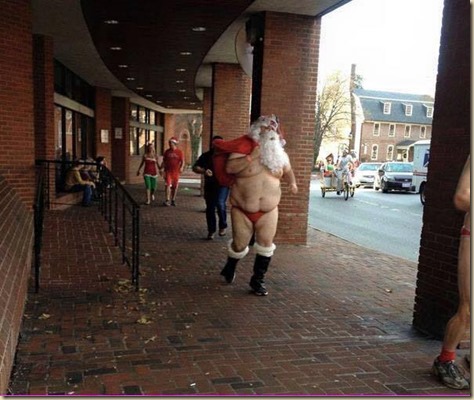 Aha!  Now if only I can find the commandment to patronize those restaurants.  Perhaps it is in the Talmud . . .